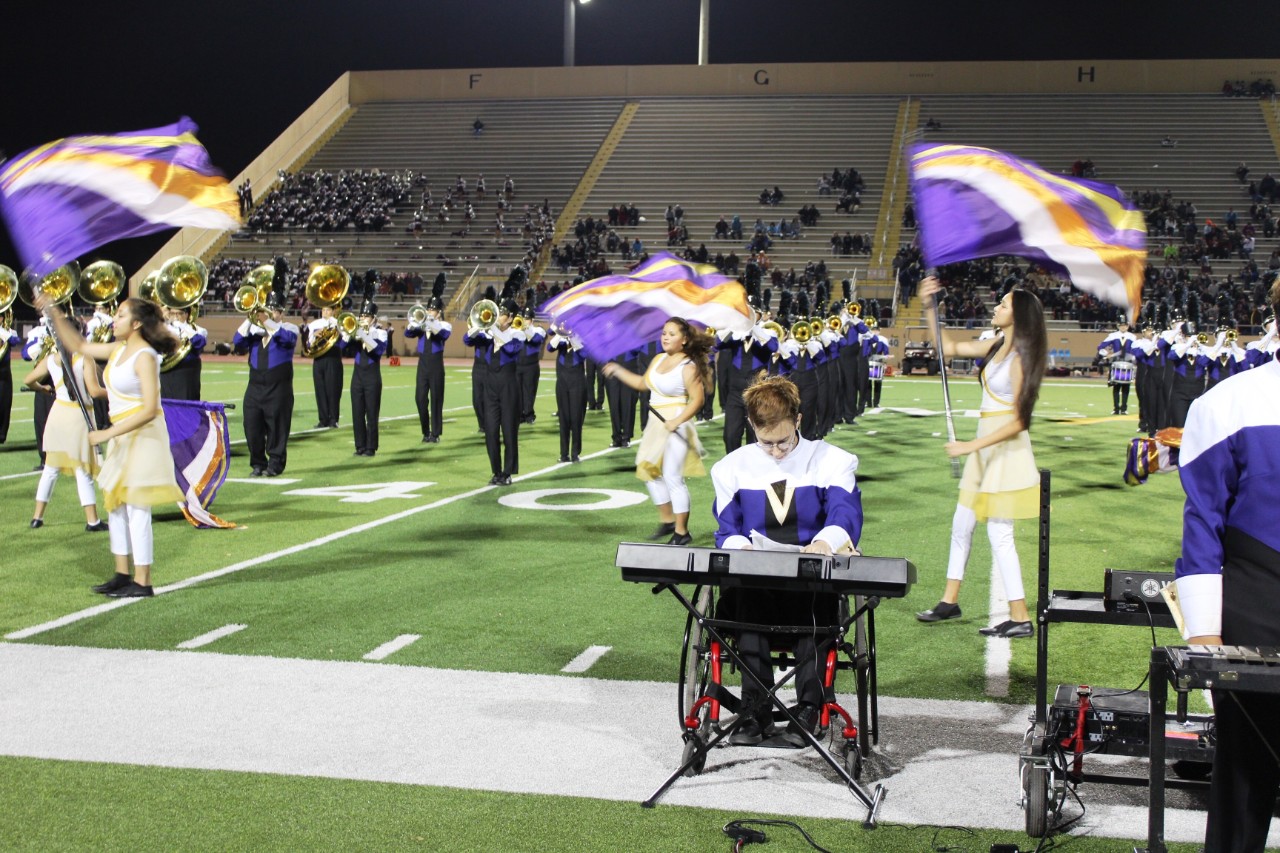 Jordan Scott is a pretty typical teen-ager. He likes hanging out with his friends, enjoys computer games and plays in his high school marching band.

Now he’s looking forward to going away to college – just him and his wheelchair. Away from home and alone for the first time in his life. “It’s going to be a challenge, but it’s something that I’m excited for,” Jordan said.

A senior at McAllen High School in South Texas, Jordan, 18, was diagnosed shortly after birth as having cerebral palsy.
His mother, Trisha Scott, was devastated. “When I was pregnant with Jordan, I had a sonogram,” she said. “At the very end of the video he swung his hand forward, and I said, ‘There’s my quarterback for the Dallas Cowboys!’ But after he was diagnosed with cerebral palsy, I mourned that and I thought, `I’m not going to be that mom watching my son play football.’”

Trisha is Jordan’s biggest advocate and pushes his wheelchair when he plays baritone euphonium in the MHS marching band. Although he uses a power chair at school, he can’t both play and steer while marching. During football games he plays a synthesizer keyboard on the sideline. “I like the band. It’s stressful at times. But in the end, the payoff is pretty good. I have fun doing it.”

Jordan receives physical education credit for band and will receive a letter jacket. Ironically, although he enjoys the school spirit and camaraderie, he’s not a big football fan and has yet to decide whether he will play in the band at Texas State University in San Marcos, Texas, where he would like to study computer science. “It will depend on my schedule,” he said. Jordan puts top priority on his studies and is in the top academic quarter of more than 400 students in his graduating class.

He recently was inducted into the National Honor Society. That posed a problem since his school, built in the 1960s, has had few upgrades for the physically challenged. The NHS induction ceremony required him to walk up a short flight of stairs and across the auditorium stage. That’s where Denise Keller, Star Kids School Liaison for United Healthcare Community Plan, was able to help.

“It was going to be difficult for him,” she said. So she discussed a special physical therapy goal of having him walk up the stairs and across the stage. “I was holding my breath the whole time,” Trisha Scott said of the ceremony. But it was no big deal to Jordan: “I felt a little nervous at first. But then you sit down and pay attention to the ceremony. Someone was there to give me a little bit of support. They walked beside me.”

The induction was just the latest challenge for Denise Keller in her role as school liaison.“I make a bunch of calls and keep calling until they fix the automatic doors for the front entrance of the school, until they fix the ramps and the street so he can get across to band.” She also arranged for Jordan to ride the same bus with his classmates to a neighboring campus.
“He rode that bus alone and his other classmates were in a separate bus. And we didn’t think that was fair,” Denise said. “They’re all going to the same place, so we didn’t understand why he had to be isolated. So we emailed and we talked and we called and we got it done. And they’re now able to all go together, mainstreamed, included in the same bus and all arriving together at the same time.

“I hope that we’re paving the way for other kids who are going to be like Jordan,”

“I hope that we’re paving the way for other kids who are going to be like Jordan,” Keller said. “Kids who are going to be going off to school; kids who want independence.”
Nothing could make Trisha Scott prouder. “My goal for Jordan has always been for him to reach his greatest potential, whatever that is. And Jordan has so much potential,” she said
“That should be every parent’s goal,” Trisha said. “You have to figure out what your child needs in order to succeed.

“We like to tell kids, ‘Oh, you can do anything you want to do.’ That’s not true. You’re setting them up for failure if you tell a child that. You do your best because that’s the best you can do.”

Jordan agrees, but said that should not be taken as an excuse. “If you feel like you can do more than what you’re doing, just give it a go. You never know what might come out of it."