Five years after first being introduced, Medicaid Expansion has reemerged as a significant health policy trend. Medicaid Expansion is an optional eligibility threshold states may adopt to provide Medicaid coverage to childless adults who earn up to 138% of the federal poverty level (FPL). States may implement the Expansion at any time, and while they can no longer receive 100% federal financing, they remain eligible for enhanced federal financing of 93% in 2019 and 90% in 2020 and beyond.

To date, 36 states plus Washington, D.C. have exercised the Medicaid Expansion option. The majority of states that have adopted Medicaid Expansion did so between 2013 and 2015, when 100% of the program costs were reimbursed by the federal government. With federal financing decreasing, these states have developed strategies to pay for their share of providing access to health care for this group – which will never exceed 10% under current federal law.

Between 2015 and 2017 no new states adopted Expansion. Many health policy watchers believed that any future adoption would be slow since the 100% federal financing was no longer available to absorb the cost of the large number of individuals who were now eligible under the new program. In Arkansas for example, the Expansion population accounts for over one-third of all individuals enrolled in the state’s Medicaid program.

However, with evidence of the positive economic impacts of Expansion growing, particularly for hospital finances, 2018 saw a new wave of states looking to take up the option. Virginia was the first state since 2015 to adopt Expansion with the passage of state legislation in 2018; the new program went “live” January 1, 2019.

Who is covered by Medicaid Expansion?

Medicaid Expansion was created under the Affordable Care Act (ACA) to serve as one mechanism to provide health coverage to the country’s significant uninsured population. Prior to the ACA, adults were eligible for Medicaid if they were: a low income and pregnant woman and/or a parent of a dependent child, a low income individual who requires long-term services and supports, or an individual with a qualifying disability. Under this definition, low income adults without dependent children were not covered by federal Medicaid eligibility rules. While many were working, individuals in this group are typically not covered by employer-sponsored insurance and are therefore largely uninsured.

At the time the ACA was passed in 2010, 44 million people1 were uninsured; today with the ACA coverage expansions through Medicaid and commercial market reforms, that figure has been reduced to about 27 million,2 with 13 million (63%) covered through Medicaid Expansion.3 An additional 4.5 million individuals living in non-Expansion states would be covered if their state expanded Medicaid.4 UnitedHealthcare Community and State is proud to serve individuals enrolled via Medicaid Expansion in 17 states. 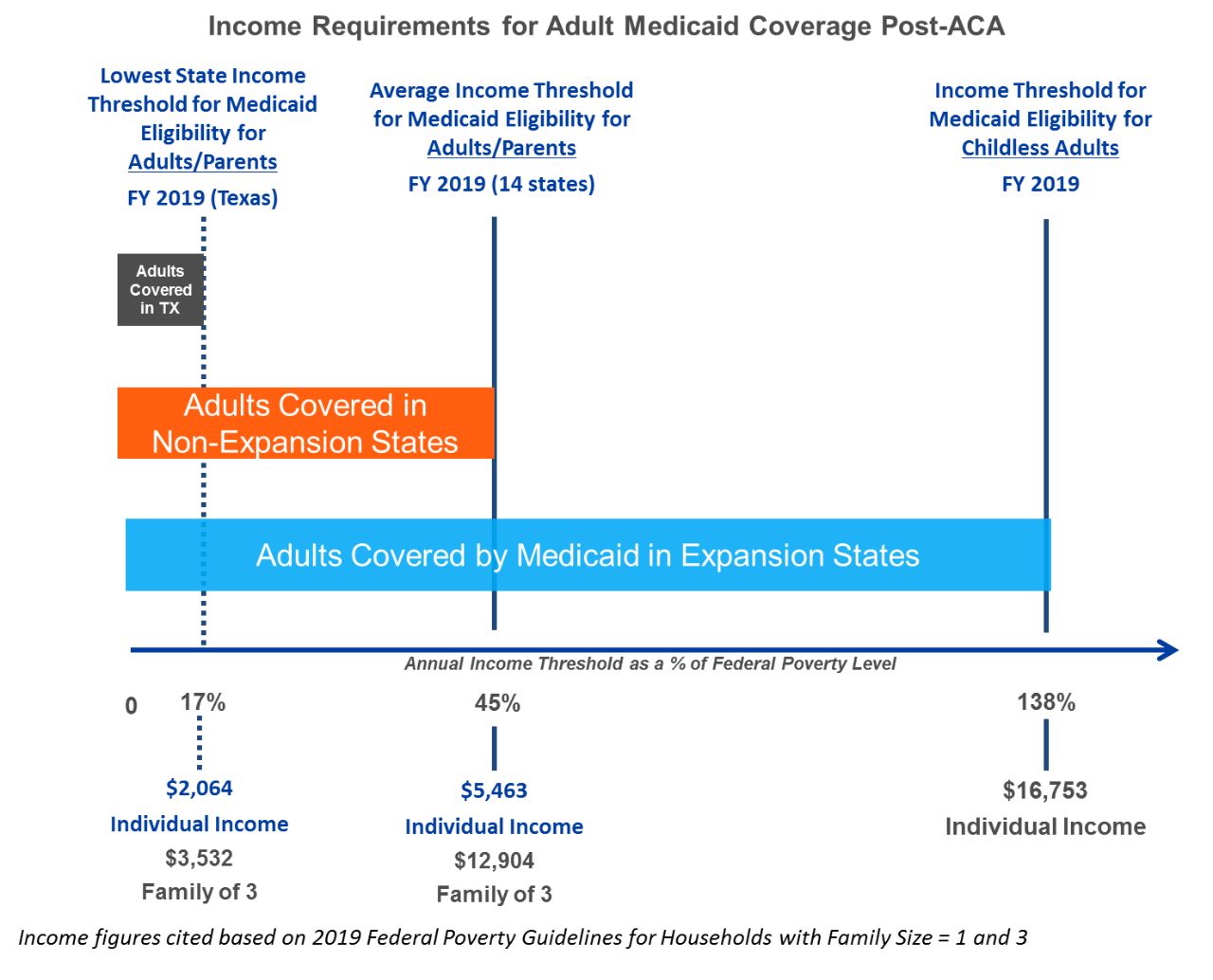 To date, 36 states plus Washington, D.C. have exercised the Medicaid Expansion option. 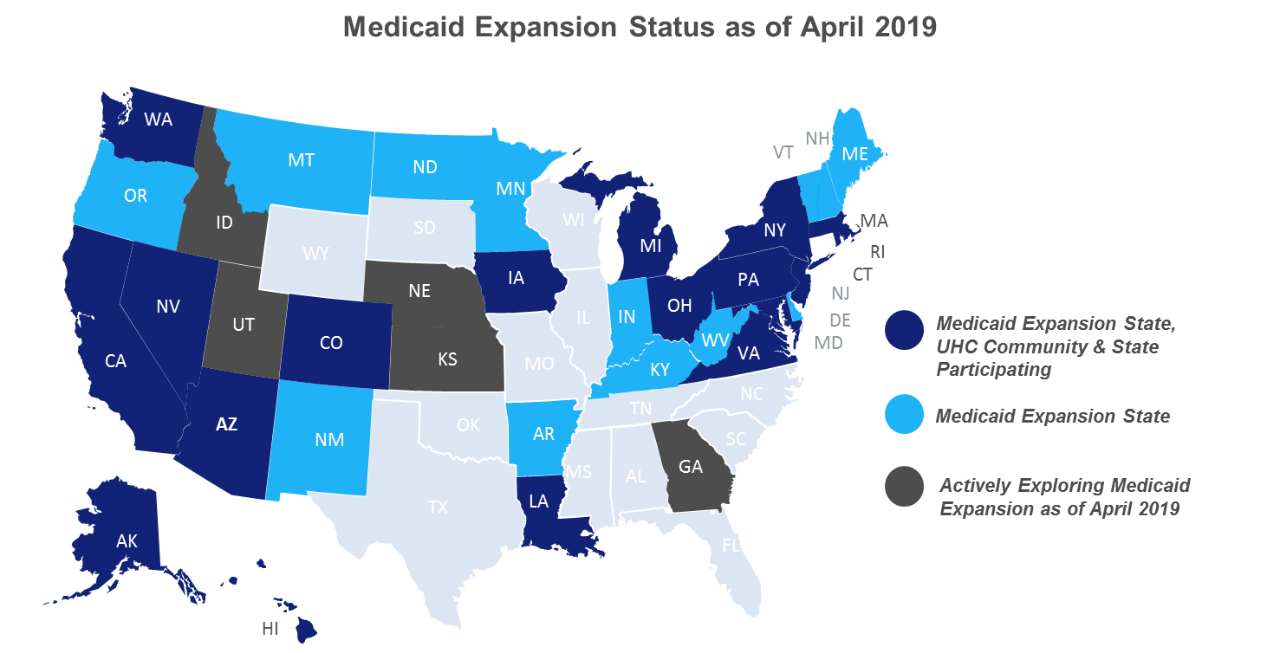 Today, four states—Idaho, Maine, Nebraska, and Utah—will or are anticipated to expand Medicaid eligibility in 2019 or 2020 while two additional states, Kansas and Georgia, are actively exploring the option via state legislation.

Voters in Utah, Nebraska and Idaho approved expansion of Medicaid through ballot measures during the November 2018 mid-term elections. Utah and Georgia have expressed their desire to “partially” expand Medicaid eligibility to 100% FPL instead of 138% FPL.

Utah received approval to expand eligibility to 100% FPL at its traditional Medicaid match rate (70%) in March 2019 and is now seeking additional approval to receive the federal enhanced match (93% in 2019 and 90% in 2020 and later) for the childless adult population up to 100% FPL. The Centers for Medicare and Medicaid Services (CMS) has historically not allowed states to partially expand Medicaid and receive the enhanced federal match that the Medicaid Expansion option provides. However, in recent weeks CMS Administrator Seema Verma has expressed that she may reconsider that decision.5 Utah also received CMS approval to freeze Medicaid Expansion enrollment if projected costs of their coverage exceed the funds appropriated by the state legislature – the first state to receive this type of approval.

As states adopt Medicaid Expansion, many have implemented or are considering program design elements that include consumer engagement models analogous to commercial insurance, as well as new requirements that could restrict eligibility by requiring those enrolled in the program to work or receive job training to remain eligible.

In January 2018, CMS released guidance on incorporating community engagement requirements (often referred to as work requirements) in state Medicaid programs – primarily for the Expansion population. Since then, CMS has approved such requirements in several states: Arkansas, Indiana, Kentucky, New Hampshire, and Wisconsin in 2018; as well as Arizona, Michigan, Ohio, and Utah in early 2019. An additional six states6 have sought waiver authority from CMS to implement community engagement requirements that would impact member eligibility, both for their Expansion and non-Expansion, “able bodied” adult populations.

States that are seeking community engagement requirements include exemptions for certain populations, most commonly students, caregivers, and those participating in substance abuse treatment programs. States and CMS are also giving serious consideration to the application of these requirements in regions experiencing high rates of unemployment due to the nature of the local job market, including the potential to exempt members in these regions from requirements.

However, in March 2019, a U.S. District Court found that Arkansas and Kentucky’s community engagement requirements violate the intent of the Medicaid program – to provide health coverage to those who are low income. Both programs would require Expansion adults, and in the case of Kentucky, “able bodied” adults who are not eligible through Medicaid Expansion, to work, receive job training, or volunteer at least 80 hours per month. The Court’s decision halted the administration of the requirements immediately in Arkansas (which were already underway and had resulted in nearly 18,000 individuals falling off of coverage since June 2018) and stopped upcoming implementation in Kentucky. The Court’s decision does not directly impact other states that have received approval, but a similar lawsuit was recently filed in New Hampshire and referred to the same judge.

States are also continuing to look to commercial market tools and consumer engagement strategies in developing Expansion programs, with a particular focus to build models that help individuals “move up and off” public assistance and prepare them to successfully navigate commercial market coverage. Virginia and Kentucky’s upcoming programs both include member cost sharing (monthly premiums and small co-pays) as well as healthy behavior incentives.

As efforts evolve to reap the economic and social benefits of expanded coverage through programs like Medicaid Expansion, states will continue to grapple with the cost of covering more individuals. The next post in this series will dig into the financing of Medicaid Expansion - as well as new partial Expansion proposals by states like Utah – and their impacts on state budgets. 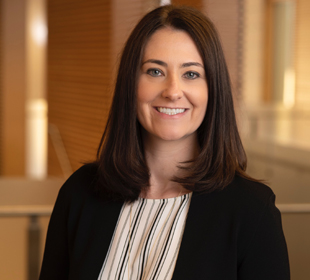