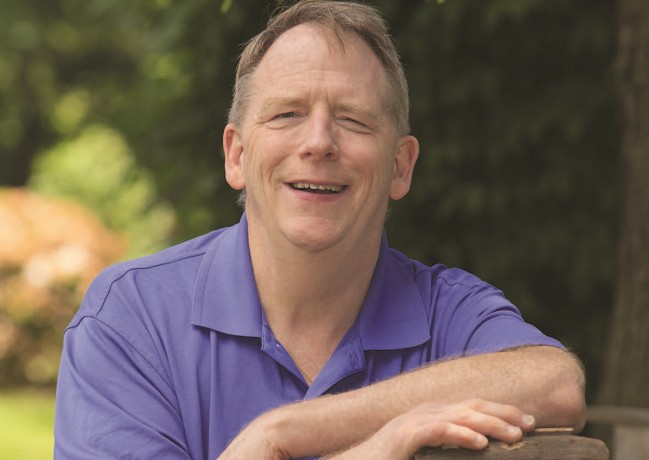 After his mother died Michael, a member with intellectual disabilities, proved that he could live — and thrive —on his own.

Michael now smiles all the time and lives independently, but that was not always the story. The 56‑year‑old has been diagnosed with an intellectual and development disability (IDD), and until recently he’d lived his entire life with his mother in Lawrence, Kansas. “It’s a tiny house and she filled it with all of her favorite knickknacks, so he could hardly walk without knocking things over,” said Nicole Preslicka, his UnitedHealthcare Community Plan care coordinator.

“I’m so glad we trusted him and listened to his wishes.” Nicole Preslicka

Michael and his mother had a very close relationship, Preslicka said. They mostly stayed home, except for weekly trips to the grocery store. When they occasionally had visitors over, Michael’s mother would do most of the talking. “He was very pleasant but didn’t smile much,” Preslicka said. “He would just nod his head or say ‘yes’ when you asked him questions.”

Everything changed when Michael’s mother died unexpectedly. “He was quite upset,” said Preslicka. Everyone involved in his care — Preslicka, family members and Michael’s case manager from Cottonwood Inc., a local disabilities support organization — assumed he would move into a residential facility.

But Michael had other ideas. “He just put his foot down and said no,” Preslicka recalled. “He was very adamant and started telling us about all the things he could do. We were surprised at his reaction and asked him to prove it to us. And he did, showing us that he could get himself up, prepare his own meals, and take the bus to and from the day program he attends at Cottonwood. He was much more independent than we had realized.”

Assured with Michael’s skills and determination, Preslicka and Michael’s case manager from Cottonwood worked together to make sure he had all the support he needed to live safely and comfortably:

With his new arrangement, Michael has blossomed. “He gets up on his own, fixes his lunch and then takes the bus to his day program,” Preslicka said. “He’s really enjoying all his new opportunities to get out and do things he enjoys.” She says Michael has gotten involved in community parks and rec programs and especially enjoys riding an exercise bike and going to his Zumba class at the local rec center. He’s even taken group tours to Galveston, Texas,and Branson, Missouri, and he’s currently making plans to go on a cruise.

What began as a tragedy has given Michael the chance to achieve. Cottonwood celebrated his success by naming him the recipient of its 2015 Shining Star Award, which recognizes the person who has experienced success in reaching personal and life goals. “I’m so glad we trusted him and listened to his wishes,” Preslicka said.“He is just the sweetest, gentlest man ever, and now he smiles so much, you can finally see his teeth. We’re all so happy for him.”