Last month, the Medicare Payment Advisory Commission (MedPAC or “the Commission”) published its annual report to Congress on Medicare and the Health Care Delivery System. This is one of two reports the Commission is mandated by Congress to publish each year; they are typically packed full of great information for us policy wonks. When appropriate, the Commission also provides recommendations to Congress regarding potential changes to Medicare program design and payment policy. Included in June’s report is a chapter dedicated to “Promoting integration in dual-eligible special needs plans” – i.e., DSNPs. (The chapter is full of rich data and detailed analysis on the DSNP landscape and if you haven’t read it yet, I would highly recommend you do).

MedPAC strays slightly into Medicaid policy with this chapter and I wanted to focus below on one of the four broader recommendations MedPAC makes: requiring DSNPs to have comprehensive Medicaid contracts. I’ll tackle the Commission’s other DSNP policy recommendations in subsequent posts.

The Commission suggests that standalone DSNPs do little to integrate with Medicaid and as a result, they recommended CMS establish a policy to require DSNPs to have comprehensive Medicaid contracts. I shared my thoughts on the value of all DSNP types, including standalones, in a recent blog post so won’t opine on that here. However, I do want to point out an oversight in MedPAC’s suggestion: CMS efforts to increase Medicaid integration and coordination in all DSNPs, not just those with comprehensive Medicaid contracts. CMS has clearly signaled its commitment to improve the experiences of duals in a meaningful and attainable manner that preserves access to DSNPs across the continuum of Medicaid program design and integration. CMS is doing this through clarified policy as well as new requirements for DSNPs.[1] Conversely, MedPAC’s recommendation likely would decrease access to DSNPs for a considerable number of duals, which it acknowledges. I expand on this challenge and others with MedPAC’s recommendation below.

Challenge 1: It would force some DSNPs to exit the market. Depending on the maturity of a DSNP program (i.e., existing DSNP enrollment and tenure in a state), this approach could be highly-disruptive to individuals enrolled in established DSNPs without a companion Managed Long-Term Services and Supports (MLTSS) plan. This is particularly true for duals without LTSS and/or behavioral health needs and for whom Medicare covers nearly all their benefits. If the policy were implemented, MedPAC estimates as many as 876,000 full duals[2] would lose access to their DSNP:

There also would be a recurring impact as states reprocure MLTSS programs and Medicaid contractors change, potentially pushing duals out to Medicare fee-for-service (FFS) or non-DSNP Medicare Advantage products because with limited exception, duals cannot be passively enrolled[1] into any Medicare programs (including DSNP).

In a state that recently reprocured its Medicaid program, the realignment of Medicaid and DSNP contractors contributed to a 13% decrease in DSNP enrollment between December 2018 and January 2019.

Challenge 2: MLTSS contracts tend to be awarded based on Medicaid experience, not Medicare/DSNP experience. Medicaid managed care program design varies across states; some administering a separate program for individuals who are aged, disabled, or have LTSS needs and others administering programs that cover all populations, including children and adults, under a single contract. Depending on a state’s Medicaid managed care program design, Medicaid managed care organization (MCO) qualifications may be considerably different from what is necessary to meet the needs of a Medicare or duals population. In addition, Medicaid procurement cycles and service areas may not align with Medicare; Medicaid contracts often launch mid-year and last several years compared with an annual launch every January for Medicare contracts. And a Medicaid service area may be select counties in a state that don’t overlap with an organization’s Medicare service area.

Challenge 3: Many states still do not have MLTSS programs. Currently, 27 states and the District of Columbia do not have MLTSS programs, and restricting DSNPs to MLTSS contractors would result in no available DSNPs in these markets. In most states duals would still have access to standard Medicare Advantage plans, potentially with a benefit structure and provider network appropriate to their needs, but there would be no relationship between these plans and state Medicaid programs, and likely no Medicaid coordination. And as MedPAC rightfully points out, limiting DSNPs to MLTSS contractors is not the incentive FFS Medicaid states need to implement an MLTSS program.

Despite these challenges, contractor alignment can be accomplished in less disruptive yet meaningful ways, based on the Medicaid managed care program design in a state.  I agree with MedPAC that their policy recommendation should not be considered in states without MLTSS programs because it would result in those states eliminating all DSNPs, forcing duals into Medicare FFS or standard Medicare Advantage plans. The table below includes other contractor alignment considerations depending on a state’s DSNP and Medicaid program design. 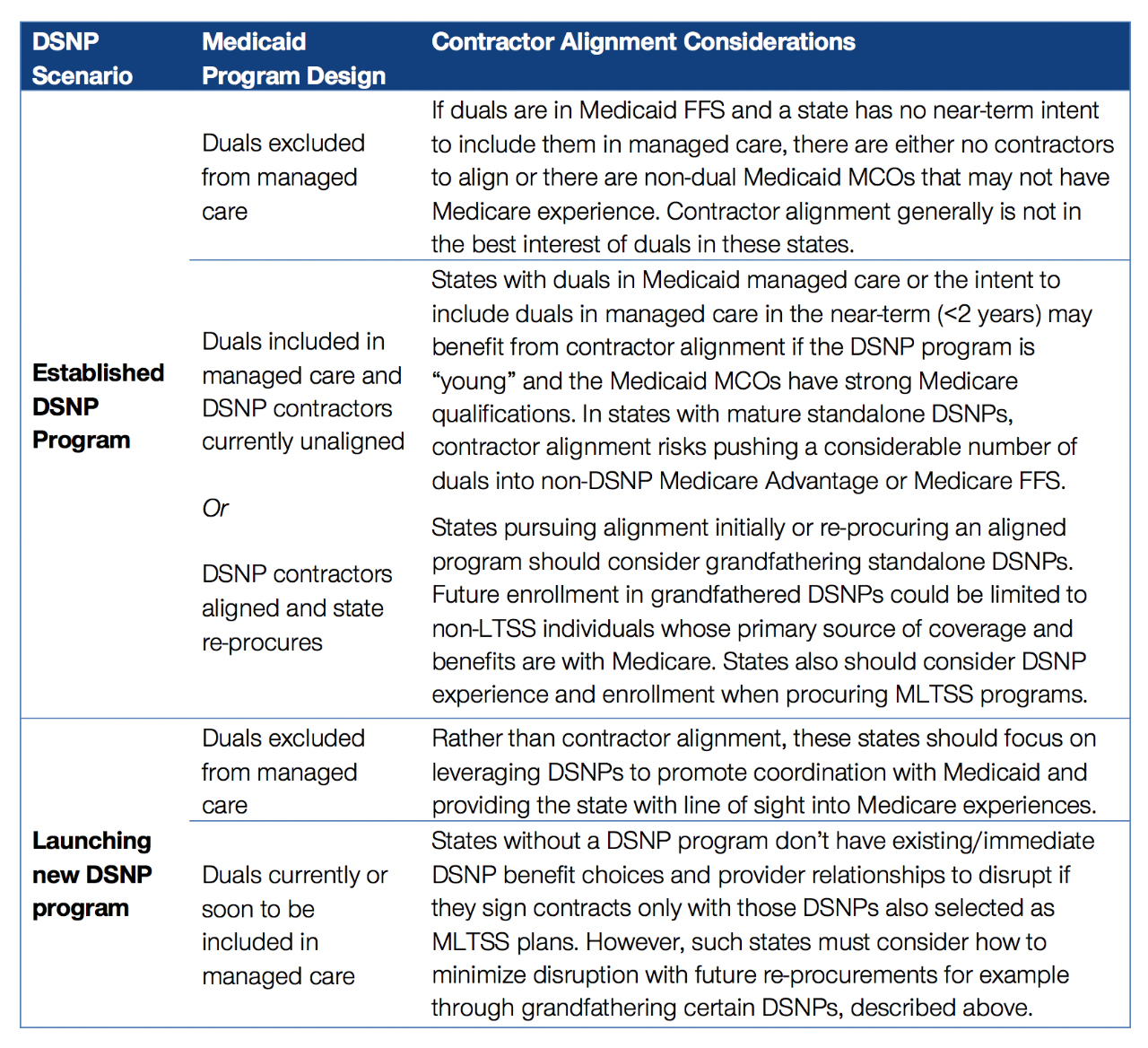 States have used various methods to promote coordination and integration across Medicare and Medicaid while minimizing disruption and preserving choice for consumers.

Grandfathered DSNPs. As MedPAC mentioned in its report, when Tennessee implemented its MLTSS program the state grandfathered three DSNPs that were not procured as MLTSS plans. New Mexico did something similar with its latest re-procurement in an effort to minimize disruption and preserve access; without grandfathering DSNPs in NM, duals would have lost access to any DSNPs in 17 counties and of the 25,979 DSNP enrollees in the state, 97% would have been displaced. Although this approach may increase the number of DSNPs a state contracts with, it preserves an individual’s relationship with a DSNP organization, his or her providers, and the benefits that individual chose when they enrolled.


Enhanced coordination between unaligned MCOs and DSNPs. Several states require enhanced coordination between unaligned DSNPs and MCOs (e.g., Tennessee, ·Pennsylvania) and use this approach to create a more seamless front-end experience for duals while minimizing the disruption that would happen with enrollment and contractor alignment. Markets with duals in Medicaid FFS also have deployed approaches such as passing the Medicare cost-share payment through to DSNPs to alleviate state and provider administrative burdens, or requiring enhanced information sharing between the DSNP and Medicaid agency. In the former example, a DSNP is responsible for the payment of both the Medicare and Medicaid costs associated with a Medicare-covered service which simplifies the state and provider experience. In the latter example, states and DSNPs can use the information to inform care needs, facilitate care coordination, and improve future program design.

Stair-step alignment. Contractor and enrollment alignment means something different to the 42% of full duals who receive 58% of their services through Medicaid versus the 58% who receive 77% of their services through Medicare. This happens as a result of “primacy of      payer”—if there is a service that both programs cover, Medicare pays first. For most duals this is most services; a key exception is LTSS, which is generally not covered by Medicare.

As a result, states and CMS should contemplate these populations differently. As I noted earlier, a less-disruptive approach for states striving for contractor alignment could be to limit future enrollment in standalone or grandfathered DSNPs to the non-LTSS population (this presumes the LTSS population has sufficient choice of other DSNPs). I’m not aware of states pursuing this specific method currently, although some do offer separate DSNP programs for LTSS and non-LTSS duals in an effort to ensure more appropriate models of care based on the needs of the population.

I’ll focus my next post on MedPAC’s recommendation that federal policymakers consider requiring aligned enrollment in DSNPs to improve integration for dual eligibles. Similar to the discussion above, enrollment alignment is a policy recommendation that can decrease system fragmentation for some duals but would significantly decrease access to DSNPs if implemented without consideration for the maturity of the existing program and the needs of the individuals enrolling. There are meaningful policy approaches to coordination, integration, and alignment that don’t have to disrupt duals’ experiences or push them to non-dual programs. More to come!

[1] MedPAC mentions in its DSNP chapter the Bipartisan Budget Act of 2018 requirements that DSNPs integrate with Medicaid beginning in 2021. Through rulemaking (CMS-4185-F) CMS interpreted and expanded on these requirements, for example providing more specificity for how all DSNPs must coordinate LTSS and BH services, grievances, and appeals with Medicaid programs.

[2] Full or partial status is determined by Medicaid eligibility criteria in a state and indicates the level of Medicaid benefits a dual is eligible for. Partial duals receive varying degrees of Medicare cost-share coverage from Medicaid but do not otherwise qualify for Medicaid benefits. Full duals qualify for both Medicare cost-share coverage and also are entitled to Medicaid coverage for various health care services and long-term services and supports.

[3] In Medicaid, states typically are permitted to “passively enroll” individuals into a managed care program or “auto-assign” to a specific Medicaid Managed Care Organization (MCO) while allowing an individual the right to select another MCO. Conversely, Medicare maintains a “freedom of choice” provision that generally prohibits CMS or states from passively enrolling an individual into a specific Medicare program/plan, although there are limited circumstances where this is permitted. MedPAC addresses select passive enrollment options in Medicare in their June 2018 Report to Congress.